How to Understand "Vulnerability is the flip side of Resilience"? 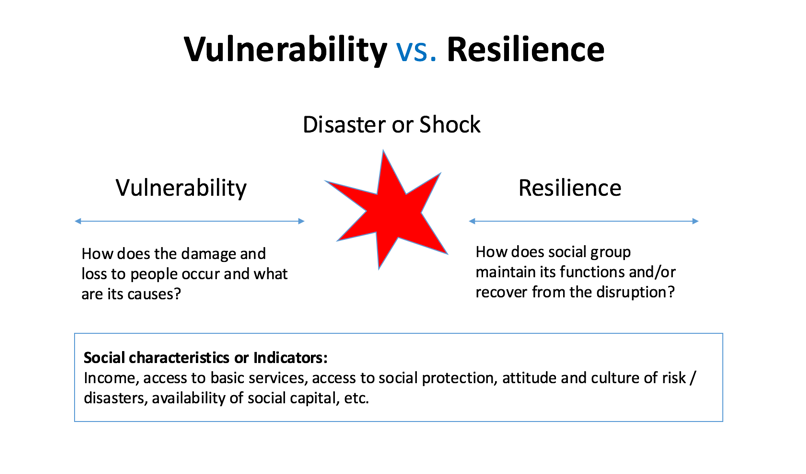 The study of social vulnerability should explain how certain social characteristics contribute to people’s worsening situation during a disaster. It should explain, for example, why over 70 percent of the dead in Hurricane Katrina were over the age of 65, and why African Americans suffered a disproportionate number of deaths relative to whites and to their local population numbers; why of the 300,000 people killed in the 2004 Indian Ocean tsunami, 240,000 were women and children; and why in the Great East Japan earthquake of 2011, more than half (56 percent) of the victims were aged 65 or older.

To some extent, social vulnerability is the socioeconomic and political root cause of risk and disaster. For example, the elderly are fragile, but age alone does not create vulnerability; vulnerability also arises from society’s failure to recognize that limited mobility impedes timely evacuation. When disaster managers and political leaders fail to design warning systems that reach people who are deaf or to provide paratransit systems to evacuate wheelchair users, society bears responsibility for the consequences. Social vulnerability thus results from processes of social inequality and historic patterns of social relations that manifest as deeply embedded social structures resistant to change.

How to Understand "Vulnerability is the flip side of Resilience"?